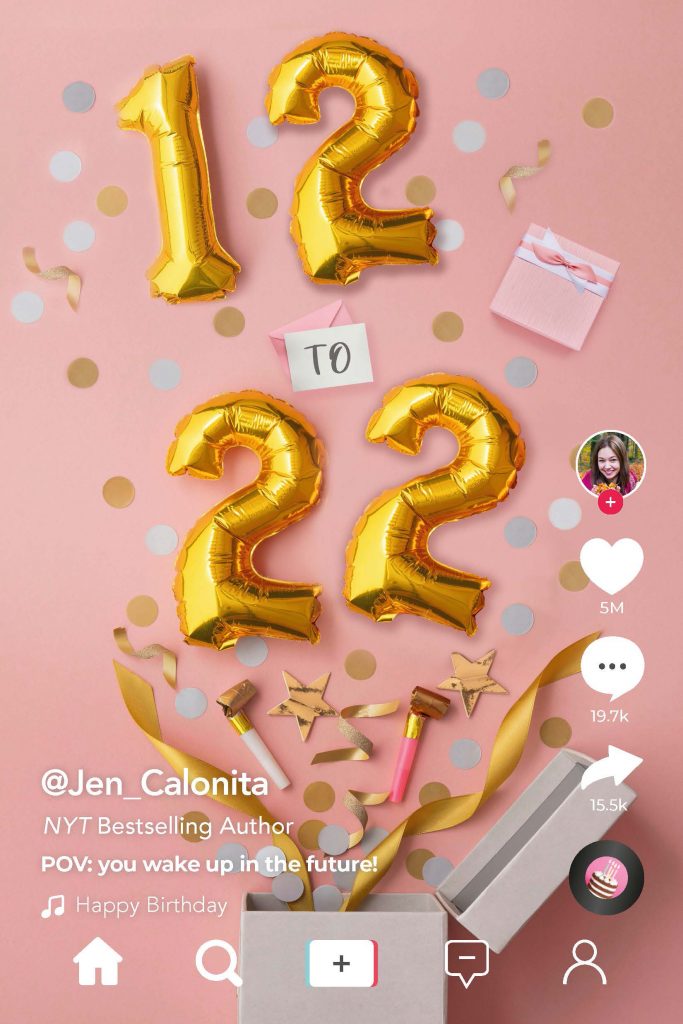 “Okay, clearly something is up with you today, but since whatever is wrong means I get to go to the Fenway event and meet Blake Riley and stars like Joshua Bassett , I’m just going to go with it,” Reese says.

I grab her arm. “Joshua Bassett? In Boston? What about Harry Styles? Is he here too?”

“I think he’s performing tonight,” Reese says. “At least that’s what you posted.”

“He’s going to SING?” I scream, and whatever new neighbor that lives across the street stops rolling their garbage can to the curb and stares at me in my pj’s worriedly.

Who cares? I’m going to a party with Hollywood stars! Twenty-two is the best age ever!”

A smart and funny modern day 13 Going on 30 from New York Times bestselling author Jen Calonita! A tween girl finds out it is like to be 22 when she jumps in time with the help of a mysterious TikTok filter.

Turning 12 1/2 shouldn’t be the most exciting birthday in the world. It’s a half birthday after all. But Harper is thrilled because she is getting the biggest gift of all: her parent’s approval to finally get social media accounts.

Except when she goes to post her first photo, there is a filter she has never heard of before. One that shows you what you will look like when you are older. Curious, Harper clicks on it…but ends up flash forwarding in time to when she is 22.

She will quickly find that being in her twenties means the freedom she always wanted, money for the glow up she didn’t know she needed and working for her idol! But Harper soon discovers a lot more has changed than she expected—including the person she wants to be. Will Harper be able to use the filter to get the life of her dreams? Or will there be more glitches?

“Be careful what you wish for! This charming reimagining of 13 Going on 30 will have readers laughing – and sighing with longing. A fun-filled page-turner with Jen Calonita’s trademark humor and heart.”  — Meg Cabot, author of The Princess Diaries and Allie Finkle series

“A fresh, modern story about wishing you were any other age, living any other life but your own. Highly relatable and wildly entertaining. I want this filter!” – Lisi Harrison, author of Girl Stuff and The Pack