“I, Mackenzie Sabrina Lowell, do solemnly swear on Perfect Storm’s potential world music domination that everything I write in this journal is the truth starting with this:

Twelve-year-old Mackenzie “Mac” Lowell’s dreams have come true. Thanks to her mom scoring the coolest job EVER, Mac is going from boy band fanatic to official tour member of her favorite group, Perfect Storm. Good thing she’s brought along her journal so she can record every moment, every breath, and every one of lead singer Zander Welling’s killer smiles in written detail and daydreamy doodles.

But between a zillion tour stops and pranks gone wrong, Zander and his fellow band members, Heath Holland and Kyle Beyer, become more like brothers to Mac. When the boys’ differences start to drive them apart, can Perfect Storm’s biggest fan remind them why they’re perfect together? It’ll be up to Mac–and her comic-book alter ego, Mac Attack–to keep the band together and on the road to stardom

Chronicling her experiences on tour, Mac’s journal springs to life with black-and-white illustrations and comic-book panels throughout its pages.

“Written in diary entries and interspersed with vaguely manga-styled illustrations as well as some of Mackenzie’s comic-book stories, this hits the sweet spot for fans of Dork Diaries. This tale of ultimate wish fulfillment is a must-read for starry-eyed fans of boy bands.” –Kirkus Reviews

“Calonita (Flunked) targets Directioners and other boy band devotees with this effervescent first book in the V.I.P. series…Kristen Gudsnuk, creator of the Henchgirl webcomic, provides exuberant comics sequences and spot illustrations throughout…The real meat of this diary-style story lies in the behind-the-scenes details of life on tour, as well as Mac’s relationships with the band members as she gets to know them as real people.” –Publishers Weekly 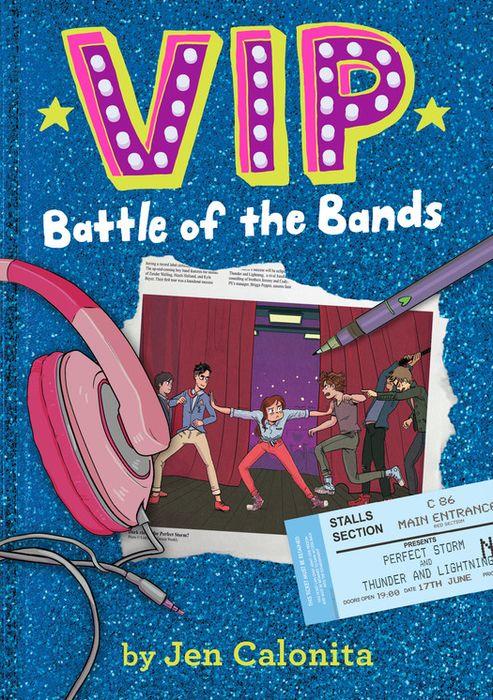